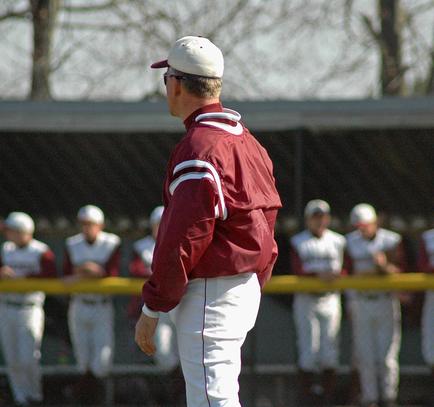 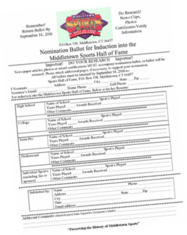 The Middletown Sports Hall of Fame and Museum was created to honor the numerous outstanding athletes and other sports minded individuals, and to preserve the deep and rich history of sports in the life of the City of Middletown.

The idea to establish a Sports Hall of Fame surfaced in 1988 during The American Legion Baseball World Series. Discussions about Middletown being the first city in Connecticut to have the honor of hosting a National Legion World Series led to the realization that Middletown has always been an excellent sports town, even back to 1872 when Middletown was a Major League Baseball City for a brief period. There have been so many excellent teams in all sports - so many outstanding athletes who brought excitement, honor and pride to our City. It was at this point that it was suggested to the members of The American Legion, Post 75 that the Post should make an effort to lease the run-down town maintenance building in the Palmer Field parking lot; renovate it for a meeting hall in one half of the building and make the other half into a Sports Hall of Fame.

Early in 1989, the Legion approached City officials with the offer of leasing the building, offering to pay the entire cost of renovating all of the interior if the City would be responsible for the exterior. After some delay, the City agreed to lease the building to the Legion for a period of fifteen years with an option of renewal. Mayor Paul Gionfriddo signed the lease in October 1990.

Prior to the signing of the lease, a group of citizens interested in creating a Sports Hall of Fame formed a Hall of Fame Committee. The committee included Bill Pomfret, Jerome "Buzzy" Levin, Anthony "Buddy" Sbona, Larry McHugh, Don Russell, Francis "Chick" Marino, Eric Schultz and Dave Darling. Others added were: Carl Fortuna, Sebastian Garafalo, Joe Lombardo, Lucy Bettencourt, Marc Levin, John Robinson, Bill Sneed and Charles Krajewski. This committee met monthly formulating plans for the Hall of Fame. They studied the operations of Hall of Fames in Meriden, Bristol, Naugatuck and Branford. After much debate, the committee agreed that the Middletown Sports Hall of Fame be exclusively for sports. All sports would be included and to be eligible to be inducted into the Hall of Fame, an individual would have to be a native of Middletown, or have played on a Middletown team. It was also agreed that dedicated sports fans and sponsors of sport programs would be eligible for induction into the Hall of Fame.

To oversee the renovation of the building, Post 75 named a building committee of : Dave Smith, Bill Pomfret, Norman Way, John Ott and Joseph Dziezyk. The Legion hired George Fellner to be the architect and CMP Construction Company to supervise the contractors. Because the building was in a flood plain and was in very poor condition, several problems had to be overcome. With the cooperation of the City officials, the construction company and several City Departments, all of the problems were overcome in a short time. The plans submitted by the architect were accepted by the Legion and the work on the building commenced.

In the meantime, the Hall of Fame Committee received non profit organization status. A Board of Directors was named and they elected Bill Pomfret, President; Eric Schultz, Treasurer; and Dave Darling, Secretary. With the help of Attorney Carl Fortuna and his staff, a Constitution and By-Laws were prepared that would guide the organization's operation. Several sub-committees were formed and plans for the dedication of the Hall of Fame were completed.

On May 2, 1993, The Middletown Sports Hall of Fame and Museum was officially dedicated. Several hundred interested citizens and City officials joined the members of the Hall of Fame Committee for the ceremonies. Mayor Sebastian Garafalo cut the ribbon at the entrance of the building and the Hall of Fame received its first visitors.

The next project was to seek nomination of individuals to be the first to be induced into the Hall of Fame. The Nomination Committee distributed ballots throughout Middletown and placed nomination ballots in the Middletown Press and the Hartford Courant. Over seventy nominations were returned.

At the October, 1993 meeting, the Board of Directors accepted the Selection Committee's recommendations for induction. They designated January 27, 1994 to be the first Hall of Fame Induction Dinner to be held at the Red Lion Hotel in Cromwell at 6:00 p.m.

Middletown is on the Connecticut River. It is home to many great sports teams and athletes at the middle school, high school college, semi-pro and professional levels. 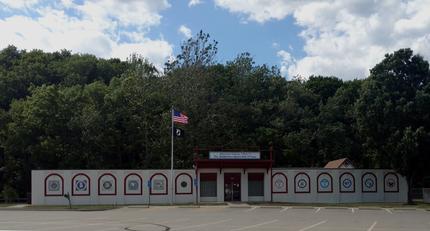 Preserving the history of Middletown sports for more than 20 years

​​
Residents of Middletown and surrounding communities are encouraged to nominate inductees every year.

Shown on the left: A reduced image of our actual nomination ballot.